Once again, British Columbia and Ontario are the most expensive provinces to rent a room, or rooms, in Canada.

PadMapper’s national rent report[1] shows that Montreal is the only city outside of those two provinces to crack the top 10 for the ninth straight month.

However, Canada’s most expensive rental markets in Toronto and Vancouver continue to report a downward trajectory in prices.

Toronto’s one and two-bedroom prices are down 10% and 12%, respectively, since this time last year.

Abbotsford, Halifax and Quebec City all trended upwards in month over month prices, with Abbotsford seeing the largest jump at 5.5%.

The cities with the largest downward trends for September were Barrie, St. John’s and London, which all saw one-bedroom rental prices drop more than 3%. 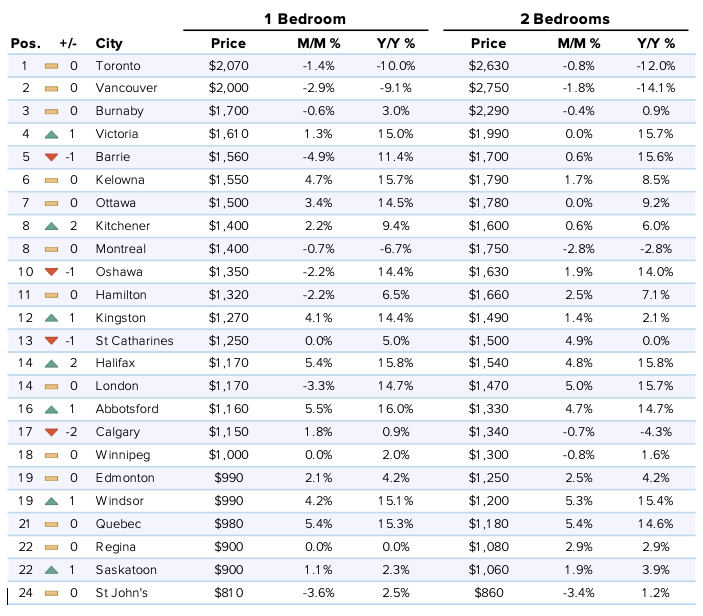 “The 2 most expensive markets continued to hit record dips in prices. While Toronto one and two-bedroom rents were down 10% and 12%, respectively, since this time last year, Vancouver one and two-bedroom rents have fallen 9.1% and 14.1%, respectively. Notably, the only other city in this report that had rents down on all fronts was Montréal, though this market’s declines were much less drastic,” reads PadMapper’s report.

This website uses cookies to improve your experience while you navigate through the website. Out of these cookies, the cookies that are categorized as necessary are stored on your browser as they are essential for the working of basic functionalities of the website. We also use third-party cookies that help us analyze and understand how you use this website. These cookies will be stored in your browser only with your consent. You also have the option to opt-out of these cookies. But opting out of some of these cookies may have an effect on your browsing experience.
Necessary Always Enabled
Necessary cookies are absolutely essential for the website to function properly. This category only includes cookies that ensures basic functionalities and security features of the website. These cookies do not store any personal information.
Non-necessary
Any cookies that may not be particularly necessary for the website to function and is used specifically to collect user personal data via analytics, ads, other embedded contents are termed as non-necessary cookies. It is mandatory to procure user consent prior to running these cookies on your website.
SAVE & ACCEPT
Generated by Feedzy